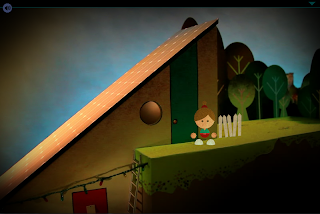 This one I didn't play very long because I was stumped on puzzles very soon after beginning. This came as no surprise to me, and it was even expected from what I had seen of the game.

Lume is a point-and-click puzzle game that takes place in a world made completely of paper and cardboard. It stars a little girl named Lumi, who has to find out why the electricity went out, and where her grandfather has gone.

Right off the bat it you're welcomed by the unique visuals and soothing music that create a wonderful in-game atmosphere. The game has many difficult puzzles... and that's where I got stuck. Honestly, I'm pretty awful when it comes to puzzle or strategy. I love puzzle games, but I can never get very far.

Verdict: Stop playing.
Lume looks to be an incredible (and cute) experience for those who are good at solving puzzles, but I may have to wait a few more years before I'm to that point.
Posted by Arkatox at 11:00 AM No comments:

What is your favorite season?
Season 3 of Hogan's Heroes.

What is the worst book you've ever read?
Anything written by Dan Brown.

Windows, Mac, or Linux?
I am content to stick with Windows.

Do you play an instrument?
Piano. Sorta.

What kind of animal would you want to be if you were forced to be an animal?
Probably some kind of cat.

What animal would you own if you could tame anything?
A lion would be pretty awesome.

Which is your favorite Star Wars trilogy?
This may be surprising, but I might actually go with the Prequel Trilogy. Outstanding music and VFX, even for today's standard, and I love Ewan McGregor in the role of Obi-Wan Kenobi. I'm hoping that the Sequel Trilogy will be as amazing as the first two.

If you could magically teleport to any time and occupation, what and when
would it be?
That's a tough one. I know I would never travel to the past, because that would alter time, and I don't want that to happen. Maybe I'd go ten years into the future, just to see what life is like then—the gas prices, who's president, what's the latest technology, etc. It'd also be sweet to see where my favorite YouTubers will be in ten years.

What are three (real, alive today) people you would pick to join your zombie apocalypse team?
Narrowing it down to three is super hard. If just picking from among my friends, I would probably pick Justin Fisher, Thomas Cook, and Steve Scott. Yeah... with that group I would definitely be the first person to die.

What does conforigurious mean?
It's when you're so angry that you want to marry someone.

If you were shrunk down to a miniature Rueben and you had to live in someone's navel, who would you pick?
1. That's not how you spell my name.
2. That's gross.

Where's Waldo?
I don't know. I actually haven't spoken to him since the Missing Apocalypse of 1997.

What is the square root of a flexnard?
Whatever times itself equals a flexnard, of course.

What have I got in my pocket?
A ring, you fool of a Took.

What question have you wished someone asked but hasn't?
Why so serious?

What is your favorite color?
Pink*.

Stay tuned, because someday I'll do another of these. Feel free to ask questions in the comments, and maybe they'll get on the next one.
Posted by Arkatox at 4:35 PM No comments:

Email ThisBlogThis!Share to TwitterShare to FacebookShare to Pinterest
Labels: Misc, Q's and A's

The evil Dr. Urchin has no friends, so he goes and kidnaps all of Glowfish's friends, including his girlfriend Coralline! Glowfish sets out on an adventure to get his friends back—and he makes quite a few new ones along the way.

First off, this game's presentation is spectacular. The story segments are cool, and no doubt a lot of very hard work was put into them. The gameplay, while not entirely original, is fun and definitely enough to keep you going. While the music doesn't necessarily stand out, it's still really good, and it complements the entire atmosphere of the game.

Speaking of which—the visuals. Glowfish is full of beautiful environments that make you want to keep playing just so you can see the next one. In addition, there are many, many different kinds of creatures you can come across, including some friends that become full-time helpers. You can upgrade the abilities of these friends, and they help you a lot in your journey.

I spent an hour and twenty minutes with this game before telling myself that it was enough for my impressions piece, so I should stop. Needless to say, I had a lot of fun with it.

Verdict: Keep playing.
I'm loving Glowfish so far, and while the previous games in this blog series weren't really my kind of game, this was. I'll keep playing, and perhaps even review it when I'm done.
Posted by Arkatox at 11:00 AM No comments:

I sat down with a game for half an hour, and this is what I thought of it.

Bullet Candy is a 2D space shooter, and though it has that "instant fun" sort of feeling that most space shooters have, that feeling is not what makes or breaks a game.

You start out with one mode unlocked: Arcade Mode. This mode is where you fight through numerous waves of enemies and try to get to the end. If you lose all of your lives, you can start up at any wave whose number is divisible by five. You earn combos by picking up little ships that are littered everywhere and apparently in need of help. You can also pick up various power-ups that help you greatly along the way.

Though the game really is fun, I found it hard to truly enjoy. One reason has to do with the fact that, with the amount of hostile bullets flying everywhere, it's almost impossible to complete later levels without dying several times in each. Another downside is that there's no proper tutorial, so it took me a while to figure out that power-ups are power-ups and not things you have to avoid.

I couldn't get all the way through Arcade Mode, but somehow along the way I unlocked Survival Mode, which is exactly what you'd expect it'd be: You have one life, and you try to survive as long as you can, with more and more enemies appearing as time goes on.

In conclusion, it's a fairly fun game, but I've certainly played better space shooters of its kind.

Verdict: Keep playing, but only if I ever get around to it.
I had some fun, but the game was nearly impossible even in the easiest difficulty. I'll probably play it again, but it's unlikely that I'll get around to it anytime soon.
Posted by Arkatox at 11:00 AM No comments:

After the Flowers have Grown

After the Flowers have Grown
By Reuben Horst

A change of perspective, a difference of view

The past is behind; what's ahead will be new

Friendship has many costs

Why are you still lost

After the flowers have grown

An for ask for forgiveness, a beg to let up

An assurance of sorrow, a surge of regret

Two objects, so much alike

Yet they are far from the same

One tragic, one lost

And neither can finish this game

This poem was originally published on An Einsteinian Approach on November 29, 2012
Posted by Arkatox at 9:44 PM No comments:

I recently realized that I own too many games on Steam, and unless I do something, a lot of those games are probably never going to be played. My solution is to set aside an hour or so every Thursday to play a game I've never played before (or at least that I haven't played in a very long time). I'll archive my impressions of said games on my blog because... well... because I feel like it!

I started this out with World of Goo, one of the first independent games that made itself known to the mainstream gaming industry. I've played a demo a long time ago, but I was awful at it and my brother thought it was stupid. Nonetheless it's a classic, so I thought I'd try my hand again.

This is a puzzle game that involves connecting balls of goo in order to get to the end of a given level. It's a simple concept, but it was pulled off with great presentation.

Unfortunately, my very first impressions were negative, as the game runs on a set resolution that you're not allowed to change. The entire game was stretched on my 1366x768 monitor, and since there were no in-game options, I had to use alt+enter to activate windowed mode.

I'm generally awful at puzzle games, so it took me an entire hour and a half to get through the first world, but I had a lot of fun along the way. The graphics are cute, the physics are well-implemented (albeit quite frustrating at times), and the music was phenomenal. Even if the entire game was a boring piece of crap, I would still play it for the beautiful soundtrack.

In conclusion, if you generally enjoy puzzle games, you'll certainly enjoy this game. I found it frustrating and it took me a long time to get through some of the levels I played, but that's simply because my mind doesn't let me figure out puzzles as well as others' do. World of Goo is a great game with great presentation.

Verdict: Keep playing... for a while.
I'm not great at puzzle games, and I probably won't get much farther in this game, but I'll probably go on to see how far I can get.
Posted by Arkatox at 11:00 AM No comments: