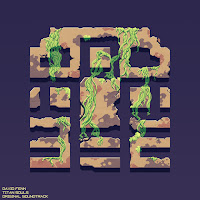 Titan Souls is an adventure game in which the player must traverse a vast overworld, defeating bosses with a bow and a single arrow. As there are many bosses and no ordinary enemies, the soundtrack is composed almost entirely of boss music, but also a handful of beautiful overworld themes for the various areas of the game world.

David Fenn is the composer for this incredible album of music. It can be purchased or listened to for free at Bandcamp, or also listened to for free on YouTube. If you're interested in the game itself, which feels like a hybrid between Dark Souls, Shadow of the Colossus and 2D Zelda, you can check it out on Steam, PS4, PS Vita, or Android.

- - -
My full Soundtrack of the Month series has gone on hiatus and for the time being has been replaced by much smaller soundtrack features, which I am simply calling Soundtrack Features. Yes, it's quite original.
Posted by Arkatox at 7:03 PM No comments: