Soundtrack of the Month: July 2016 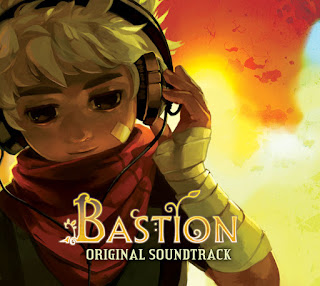 To close up year two of the Soundtrack of the Month series, I decided to feature something very near and dear to me, a game called Bastion. Settling on an apt description for the genre of the game's setting is, in itself, quite difficult. Perhaps, a post-apocalyptic steampunk fantasy story which takes place on a nation consisting of floating islands. The music is masterfully written and composed by Darren Korb, who also serves as the singing voice for the character Zulf.

The album, like the game itself, is a superb mix of genres, described by Korb as "acoustic frontier trip-hop." It's incredibly unique, and matches perfectly with the bizarrely unique world of Bastion itself. The album opens up with the game's narrator and deuteragonist, Rucks (voiced by Logan Cunningham), giving an introduction, after which the listener is treated to the music of the game.

There are three sung songs in the game, and four on the album. All of them are sung by characters in the game. "Build That Wall" is Zia's theme (sung by Ashley Barrett), and "Mother, I'm Here" is Zulf's theme (sung by Korb). "Setting Sail, Coming Home" is the ending theme, which is an amazing duet hybrid of Zia and Zulf's themes. The final, album-exclusive song is "The Pantheon", sung by Logan Cunningham as Rucks.

Track 2: A Proper Story – A proper story's supposed to start at the beginning. Ain't so simple with this one.

Track 12: Build That Wall (Zia's Theme) – When Zia's world literally crumbles to dust around her, her only solace is to sit and play music, and pray that one day help will arrive.

Track 16: The Mancer's Dilemma – A number of the songs can sound quite haunting, highlighting a feeling of tragedy and fleeting hope during gameplay.

Purchase Bastion (Original Soundtrack) on Bandcamp, iTunes, or Amazon MP3.
You can also purchase a physical CD on the Supergiant Games Store.
Or listen to it for free on Spotify or YouTube.

Bonus: In celebration of the conclusion of this series' second year, I put together another playlist of various great soundtrack pieces. Some of them are from soundtracks I've featured; many are not. You can check out the playlist here, and last year's playlist here.
Posted by Arkatox at 4:00 PM No comments: