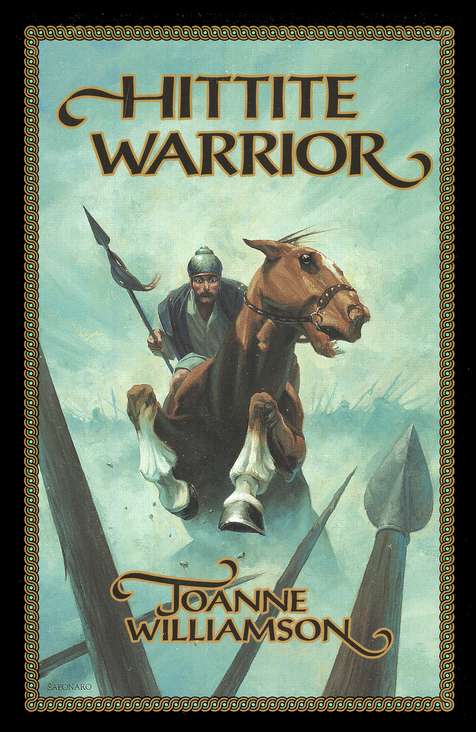 In my years as a homeschooler, I had to read a lot of literature. I still do in high school, but it's very different. One book that I read in my middle school years was Hittite Warrior by Joanne Williamson. It's historical fiction from the time of the Bible's book of Judges. I loved it when I first read it, and I was excited to pick it up again when it was assigned in high school.

The story focuses on Uriah, a Hittite who has found himself homeless and without family due to his homeland, Great Hatti, being invaded by the "sea people." He must make his way to Canaan, and eventually, though his adventures, find himself in a war between Canaan and the tribes of the Hebrews. Having no real allegiance himself, his nation being gone forever, Uriah must ultimately decide which side he is to join, and in the name of which god, if any, he will fight.

Hittite Warrior is unique, both in story and in writing style. It focuses on a portion of history largely ignored by today's society, because it was so very long ago and hardly relevant to anything anymore; but that's part of what makes it a good story. Since the reader might not know very much about this entire era, it almost feels like it could be from another world's history, rather than our own. All in all, it's fascinating.

The writing style is unique because it often moves events along at a very quick pace, almost as if the narrator is summarizing the events, but at the same time it never leaves any details ambiguous. It doesn't spend paragraphs and paragraphs explaining something, but rather explains it quickly in a way that you fully understand. It doesn't make you feel any less for the characters or their emotions. It's quite unlike almost anything else I've read, and it's very well done.

My biggest complaint with the book is foreshadowing. A lot of details are bluntly foreshadowed, but it's actually somewhat appropriate due to the writing style. It does not make Hittie Warrior any less of a spectacular read.

Hittite Warrior is a decently short book, and it's very easy to read. It tells a brilliant story with characters that the reader will care about. Uriah Tarhund makes for a great main character and narrator, and his struggle is realistic and relatable. I would never want to be in his position at any point of the book.

Overall, you should read this book. It's worth the time.
Posted by Arkatox at 4:00 PM No comments:

Where have I been? What happened to Thursday Impressions? Why didn't you get any cake? I'm here to answer all of these questions!

1. School started up! I'm a senior! Unfortunately, this means it's going to be a lot harder to blog, or even write in general. It practically halts all pleasure reading, but it also means I'll have reviews for books I read for school. I'll still have some tricks up my sleeve as well.

2. Thursday Impressions has not been showing up the last couple weeks because it's now on indefinite hiatus. The series was fun and it had its time, but I felt it was time to stop, at least for a while. This decision was also partially chosen due to school starting back up, but it was shared influence.

3. I'm 17! I had another birthday, and it wasn't too shabby. (The definition of shabby is, according to Google: "in poor condition through long or hard use or lack of care." It might not have been a very fun birthday, but at least it wasn't shabby!) I can now legally play M-rated games without my parents' permission. Um... not that I necessarily would.

4. You didn't get any cake because I didn't even have cake for my birthday. So there.

If I forgot something, I'll make sure to mention it in a future update. However, for now, I shall see you all later.
Posted by Arkatox at 5:24 PM No comments: