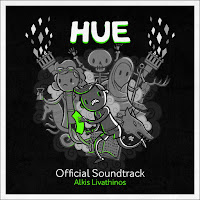 Hue is a puzzle game that focuses on using colors to manipulate the world around you. It's packaged with an incredibly thought-provoking narrative, and a melodic soundtrack that beautifully captures the soothing atmosphere of the game. The music was scored by Greek composer Alkis Livathinos, and has an emphasis on melodic piano. Hue's main theme can be heard multiple times throughout the album.

The Hue soundtrack can be purchased or listened to for free at Bandcamp. It can also be purchased on iTunes and Amazon, and listened to on Spotify. The game itself is a very enjoyable experience. If you enjoy inventive and relaxing puzzle games you should check it out. Hue is available for Steam, PS4, PS Vita and Xbox One.

- - -
My full Soundtrack of the Month series has gone on hiatus and for the time being has been replaced by much smaller soundtrack features, which I am simply calling Soundtrack Features. Yes, it's quite original.
Posted by Arkatox at 5:00 PM No comments: