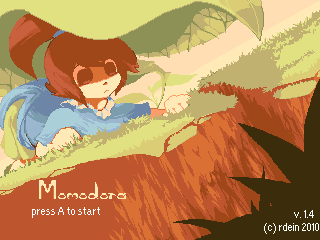 I’ve had my eye on a particular game series for some time now. It's called Momodora, and it's a series of action platformer games that just released its fourth installment. While Momodora: Reverie Under the Moonlight looks to be a highly sophisticated and polished game, the original Momodora was released in 2010 with a far more amateur look and feel to it. For me, however, this was a very nostalgic period for indie games, especially those created with Mark Overmars' Game Maker, as Momodora was.

Momodora is an intentionally, and sometimes frustratingly, difficult game. The creator even suggests that players skip this game and move on to its sequels, as it was inspired by the difficulty of early arcade games. I, being the gamer that I am, and knowing that I’ve probably played much more frustrating games from the same era of the industry, promptly ignored this warning and played the game anyway. 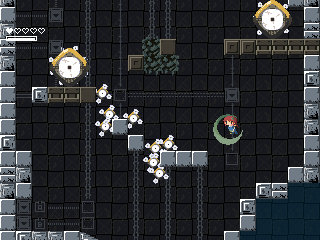 Throughout Momodora you get access to a number of different weapons that you can cycle through, although you'll probably just end up alternating between a couple of them. Players are also given two secondary items you can cycle between that you’ll find yourself using quite frequently. One creates an easily-breakable shield around the character offering more defense, and the other is a boomerang that basically works as a secondary weapon, which comes in handy a lot.

The story... is almost entirely in a text document. It's not actually addressed in the game until the end. This, as well, may have been inspired by early titles in the game industry, whose stories would be almost entirely restricted to the games' manuals. The graphics well fit the era and style of game, as sort of a medium between Cave Story and Theseus and the Maze. The music is good, and fitting. The entire soundtrack (and all of the other sound effects) are included in the game's zip folder as .OGG files. 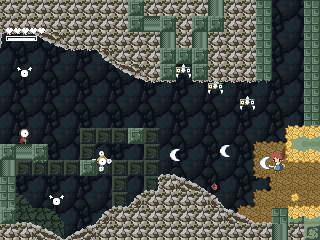 While I was able to get through the game and I very much enjoyed it, it's most certainly not for everybody. If you're looking for a more sophisticated experience that's not so much of a frustrating challenge, perhaps you should just jump ahead to a later game in the series as the developer suggested. I might be a little more sympathetic towards this game if it weren't for the fact that it uses one of my least favorite tropes, which is to have a very difficult boss battle after the final level of the game, with no save in-between.

If you want to try your hand at the game, you can check it out for free here. Look for my reviews of Momodora II, Momodora III, and Momodora: Reverie Under the Moonlight in the coming months.
Posted by Arkatox at 4:00 PM No comments:

Soundtrack of the Month: April 2016 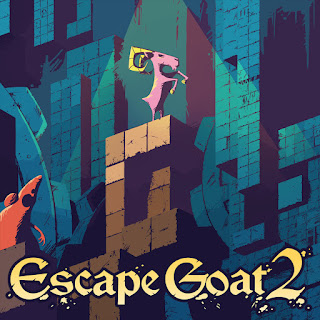 Escape Goat 2 is a platforming game about a goat navigating a labyrinth, rescuing sheep, and trying to escape to the surface. Is this a joke? No, it's not. This is a real thing. It's a lot of fun, and the music is amazing.

Ian Stocker, the game's main developer and soundtrack composer, used to work in the mainstream game industry as a sound designer and composer. So players not only get to navigate a goat through a bunch of crazy puzzle-platformer levels, but they get to do it while listening to totally rad music.

You still think I'm joking. The joke is that I'm not. I'm dead serious.

Track 1: Restoration – Escape Goat 2 features a graphics style very different from the pixelated style of the first game. The music style gets a renovation as well, to better mach the new visuals.

Track 5: Reunion – This track is used for the game's secret levels. Yes, you are headbanging to music about a goat.

Track 8: Peaceful Sheep – Did I mention that you're trying to rescue sheep?

Track 14: Caper Erratus – The credits music of the game, and one of the greatest masterpieces I've had the pleasure of listening to. Not only is it a reprise of my favorite track from the first game, but it was also given words, sung by a choir, in Latin!

Purchase the Escape Goat 2 soundtrack on Bandcamp, Loudr, or iTunes.
Or listen to it for free on Spotify or YouTube.
Posted by Arkatox at 4:00 PM No comments: