Email ThisBlogThis!Share to TwitterShare to FacebookShare to Pinterest
Labels: Misc 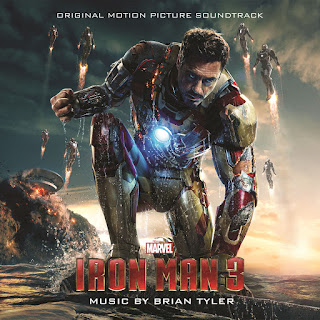 I am a vocal fan of the Marvel Cinematic Universe. The quality of Marvel movies has far exceeded that of most other films in the industry, and has remained consistent in this top-notch quality for half a decade. The storytelling and direction has been absolutely superb, and beyond industry standards nearly every step of the way. Along with this impeccable level of presentation, we have the music.

Iron Man 3 is a subject of much controversy among Marvel fans. I may value it as one of my favorites, but many people don't feel the same way. Even if you found the film less than satisfactory, you'll undoubtedly still very much enjoy the music. Brian Tyler paints an incredible backdrop to the story and Tony Stark's struggle with post-traumatic stress disorder, following the events of The Avengers.

When it comes to film soundtracks that could be described as "epic," the names of a few composers often get tossed around. They're typically from past generations, known most prominently for works from decades ago. Brian Tyler, on the other hand, has only been rising to fame in the last decade, and stands on his own among long-time legends in the industry.

Brian Tyler is the perfect fit for the Marvel Cinematic Universe, and the scale of its films. After Iron Man 3, he would also return to score Thor: The Dark World on his own, and Avengers: Age of Ultron with legendary composer Danny Elfman. No further collaborations with Marvel have been announced, but it'll be no surprise if he returns to the film universe in the future.

Track 3: Attack on 10880 Malibu Point – I'm not sure, but this might just be the most intense soundtrack cue in my library.

Track 6: New Beginnings – On the contrasting side, we have softer, more melodic music to accompany the less active and more hopeful portions of this film.

Track 20: Can You Dig It – This song admittedly took some time to grow on me. It's a more active, energy-pumping rendition of the film's main theme, used for the film credits. It's the kind of music you could work out to.

Purchase Iron Man 3 (Original Motion Picture Soundtrack) on Amazon or iTunes.
Or listen to it for free on Spotify or YouTube.
Posted by Arkatox at 4:00 PM No comments: