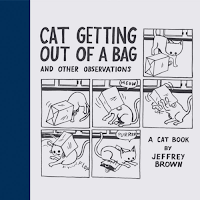 Cat Getting Out of a Bag and Other Observations by Jeffrey Brown is, to put it simply, the greatest thing ever. It's literally a bunch of random, hilarious, and adorable cat videos, in the form of 9-panel (or occasionally 18-panel) comics, instead of actual videos. That's the whole book.

Cartoonist Jeffrey Brown has created over 30 books, about all sorts of different subjects. He even released a follow-up to this book, called Cats Are Weird: And More Observations. This man has way too much time on his hands, and that's why his work is brilliant.
Posted by Arkatox at 4:00 PM No comments: 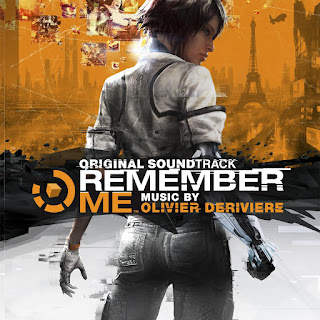 Remember Me is one of the few incredible games I actually discovered through discovering their soundtracks. I found it one day while browsing Amazon. I'd never heard of the game, but the soundtrack was composed by Alone in the Dark expert composer Olivier Derivière, so I knew that at least the music aspect had to be good. Several months later I acquired the game, played it, and absolutely loved it. I bought the soundtrack very soon thereafter.

I fell in love with Remember Me from the very beginning. I entered the game knowing next to nothing about it, which was intentional as the game begins with the protagonist losing all of her memory. The game takes place in the cyberpunk, dystopian future city of Neo Paris, and has a major emphasis on memory-related technology. The story is unique and highly thought-provoking, and the soundtrack is among the greatest I've heard, with a superb blend of orchestral and electronically altered score.

Derivière composed the entire soundtrack, which was then fully performed and recorded by the Philharmonia Orchestra. He then digitally processed and manipulated the music with multiple layers and effects to create a beautiful, half-orchestral, half-electronic sound which perfectly fits the world and story of the game. I love the amount of detail poured into the world, and the music was a major aspect of that.

Track 1: Nilan the Memory Hunter – The jaw-dropping main theme of Remember Me. Our protagonist is Nilan, who used to be the most skilled Memory Hunter in the world.

Track 3: Still Human – I consider this as one of the main themes of Neo Paris, even though a different track is specifically named after the city. Perhaps this is more a theme of the slums.

Track 6: The Enforcers – One of the combat themes for Remember Me, playing when you get into a hassle with the law enforcement, called Enforcers.

Track 10: Our Parents – While Nilan begins with no recollection of who she is or was, her proceeding quest does provide some answers. Which or how many, I will not say.

Purchase Remember Me (Original Soundtrack) on iTunes or Amazon MP3.
Or listen to it for free on Spotify or YouTube.
Posted by Arkatox at 4:00 PM No comments: