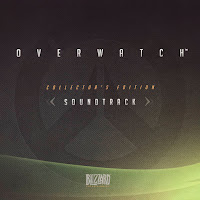 My most recent addiction is surprisingly not a television series, but an online multiplayer video game called Overwatch. The game itself has no story mode to play through—only online matches—but the developer Blizzard has released a multitude of story and lore for the game through the means of comics, animated shorts, and other methods.

Overwatch contains many memorable melodies, including a grand main theme and various level themes inspired by different parts of the world, scored by a fantastic team of composers. While the soundtrack sadly doesn't feature the scores of the incredible animated shorts, it does include the score to the original cinematic announcement trailer.

You can check out the soundtrack on iTunes, and you can also find it by searching on YouTube. This one's not on Spotify. Sorry about that.

My full Soundtrack of the Month series has gone on hiatus and for the time being has been replaced by much smaller soundtrack features which I am calling... Soundtrack Features. Yes, I know it's original.
Posted by Arkatox at 10:56 PM No comments: