I've always enjoyed making these, and people have told me they enjoy reading them. Here are 20 more random facts about that weird kid who runs this blog.


There you have it. I hope you were entertained. Now if you'll excuse me, I've thought about myself enough for one night.

Soundtrack of the Month: October 2015 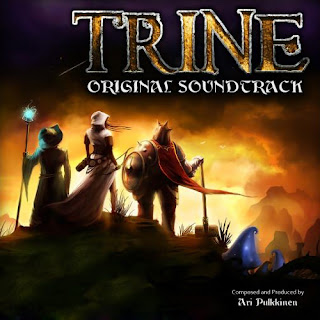 Trine is the epitome of fantasy soundtracks. The story of the game is nothing particularly special—three unlikely heroes are magically bound together through a mysterious artifact and must save the kingdom from an undead army—but the combination of great characters, pleasurable gameplay, exotic environments, and gorgeously fitting music are what make this game the gem that it is.

Ari Pulkkinen scores this mystical masterpiece. From the first note the listener is captivated by this wonderful world of fantasy. Trine is one of the few soundtracks that I was actually interested in purchasing before I was even into soundtracks. It made that much of an impact on me. Few soundtracks can rival it in my eyes, with the prominent exception of its sequel.

This feature comes a little over a month after the release of the third game in the Trine series. Trine 3 has received a lot of flack for various different reasons, but the music is not one of them. Sound design remains exceptionally strong throughout the series. I have yet to play the new game myself, but whether I'm disappointed or pleasantly surprised by the experience, I'm certain I'll be purchasing the soundtrack very soon thereafter.

Track 2: Academy Hallways – The song that greets the player as they set out on their journey, after completing the tutorial level. It sounds like what it is—the start of an adventure.

Track 4: Dragon Graveyard – The piece that stood out to me the most when first playing the game, and to put it simply, my favorite track. A gorgeous piece.

Track 16: Tower of Sarek – I don't know who Sarek is (aside from an apparent Star Trek character), but his tower is the final level of the game.

Purchase Trine (Original Soundtrack), on AriTunes, iTunes, or Amazon MP3.
Or listen to it for free on Spotify or YouTube.
Posted by Arkatox at 4:00 PM No comments: