Hey you. Yeah, you. You're beautiful, you know that? Seriously. Just thought you should know.

It's been a year and a half since I just posted a miscellaneous update. I figured I'd scramble around and try to come up with something new to report about my life. I'm doing plenty of nothings, but also some somethings here and there.

First off, I got a writing gig! A friend approached me to write some content for a sci-fi/fantasy entertainment site. I have some ideas brewing, but there's currently nothing of mine up on the site. Let's hope I don't botch this like the last time I got a writing gig. If you're interested, you can check out the site, Legendarium Media. (I love that name, presumably taken from Tolkien's legendarium.)

Secondly, I have a secret project brewing that I'm excited about which involves music. I'm hoping I can get it off the ground, and then pull through once I get it started. It'll probably be harder than I imagine it in my head, but I won't know until I try. Hopefully more information on that in the future, but no promises.

When it comes to entertainment I engage in, you can of course see everything I'm currently watching, playing and reading on my Status page. What you can't see there, because it's constantly fluctuating, is what music I've been recently listening to. Right now two of my favorite albums are Haunted by Poe and The Human Contradiction by Delain. I've also really been digging a four-track EP I found on Bandcamp called Unexpected, which is completely free.

For television shows, I most recently finished the second season of Daredevil, which was sooooo good. In the last year I also watched the entirety of Lost, and Veronica Mars, along with pretty much everything Joss Whedon ever made (Buffy the Vampire Slayer, Angel, Firefly rewatch, Serenity rewatch, Dr. Horrible's Sing-Along Blog, Dollhouse, Much Ado About Nothing). Okay, yeah, I still have a little ways to go. At least I've got his TV shows covered.

For what shows I'm currently watching, as I said, check out the Status page. Which, strangely enough, I love updating. I update the Status page every chance I get. I don't care that nobody reads it. I love doing it! I don't even know why!

The last topic I want to touch on is why this post is labelled as the 483rd miscellaneous update.

...Because I wanted to call it that. Now get out.
Posted by Arkatox at 4:00 PM No comments:

Soundtrack of the Month: March 2016 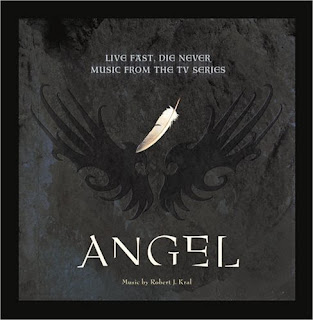 Robert J. Kral served as the primary score composer for Angel, although the album features a handful of other individuals and artists as well. The soundtrack very much reflects the dark and twisted themes of the series, but also the prominent, ever-focused theme of atonement; of searching for redemption, but knowing you may never truly find it so long as you walk the Earth.

Initially, Robert Kral began work on the series as an assistant to longtime Buffy composer Christophe Beck, who acted as main composer for the first season. One of Beck's compositions made it onto this album with the track "I'm Game", which occasionally acted as a heroic theme throughout the series, from the very first episode. It can be heard for the final time in the penultimate episode of the series.

Track 6: Hero – One of the most memorable episodes of Angel's first season, and possibly the entire series. First soldier down.

Track 15: Through the Looking Glass – One of five tracks that cover the several-episode arc that takes place in the mystical, demon(ish) dimension of Pylea, toward the end of Angel's second season.

Note: The physical version of this soundtrack contains four additional songs by other artists that were featured in the series. These songs are well worth the physical purchase.

Purchase Angel: Live Fast, Die Never on Amazon or iTunes.
Or listen to it for free on Spotify or YouTube.
Posted by Arkatox at 4:00 PM No comments: