I would walk the world wide
Just to stand here by your side
As we hold hands, I won’t let go
Let us dance across the snow

I stand here at the crossroads
Two paths that I could take
The brighter road, it calls to me
A feeling I cannot shake

If you asked the question
I would not turn you down
But I’m content to live my life
With that road left alone
Posted by Arkatox at 1:30 PM No comments:

Soundtrack of the Month: November 2014 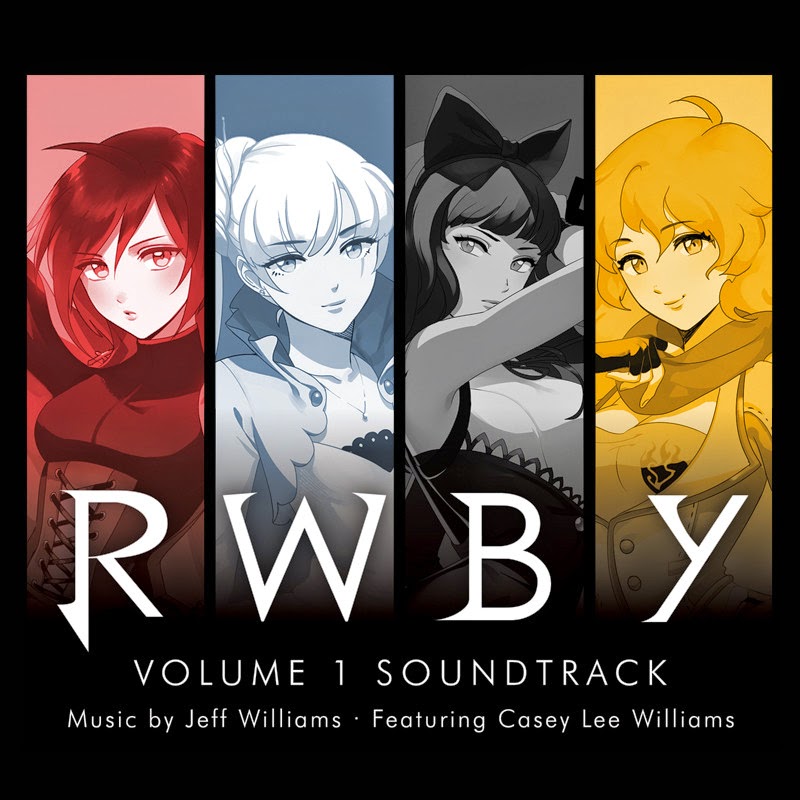 For some odd reason, I have not watched a lot of anime. I'm not exactly sure why this is, as one thing I've learned over time is that anime music is incredible.

RWBY (pronounced "Ruby") is a 3D anime-esque webseries that takes place in the fantastical and awesome world of Remnant. It focuses on the story of Ruby Rose, a fifteen-year-old girl who wants to become a Huntress in order to defend the kingdoms of Remnant from the nefarious creatures of Grimm. The music is composed by Jeff Williams, and the vocals on many songs are performed by his daughter, Casey Lee Williams. Some additional composing was done by Steve Goldshein and Alex Abraham.

Jeff Williams is previously known for scoring three seasons of the machinima webseries Red vs. Blue, also by the creators of RWBY. While the soundtrack was incredibly awesome for that series while Williams was the composer, I must warn you that both the soundtrack of Red vs. Blue and the series itself are incredibly unclean. Investigate further at your own risk. (Here is a clean example of the soundtrack, coincidentally featuring Casey Lee Williams.) RWBY, however, was intended to be clean from the very beginning, and the soundtrack only includes a few instances of mild language.

Williams is easily one of my favorite composers of all time. The music he writes is right out of a JRPG, and it fits perfectly with the world of RWBY. Additionally, his songwriting is incredible.

The soundtrack to RWBY, Volume 1 comes on two discs—Disc 1 is the "soundtrack", which contains all the songs that contain lyrics; Disc 2 is the "score", which includes sixteen tracks, one for each episode of Volume 1. The first disc includes a wide assortment of tracks. A few of the songs only appear in the series, in part, as brief credits music for individual episodes, whereas on the soundtrack disc they are complete songs. Additionally, some of the songs have multiple versions that are included in the same release.

For an example of how well the music and animation work together, I recommend you check out the Red Trailer, White Trailer, Black Trailer, and Yellow Trailer. These four trailers were released over time leading up to the premier of the series, and each one announced and introduced one of the four lead characters. Musically, the Red Trailer introduces Ruby's theme, the White Trailer introduces Weiss's theme, the Black Trailer introduces Blake's theme, and then the Yellow Trailer does a remixed medley of all three previous character themes before finally introducing Yang's theme in the final minute. Ruby, Weiss, and Blake's themes are heard instrumentally all throughout the series.

Incidentally, there's a specific reason why I chose this month to feature this soundtrack. One reason is that it's one of my favorite soundtracks, ever, and I couldn't wait to feature it. The more prominent reason is that the incredible lead vocalist of RWBY, Casey Lee Williams, turns sixteen this month. Just let that sink in a little. She was only fourteen when this album was recorded, and she had more talent than you will ever have in your life. Yup.

It's my recommendation that you watch through RWBY, Volume 1 before you listen through the soundtrack extensively. It's not a necessity; it's just my recommendation. Don't fret, though, because you can watch the entire series so far, absolutely free, on YouTube, the Rooster Teeth website, and Crunchyroll. Volume 2 of the series concluded a mere two days before this post was published, so we should be seeing the release of the next soundtrack quite soon as well.

Disc 1, Track 1: This Will Be the Day – The theme music for Volume 1 of RWBY. The first verse and refrain are played (along with an intro cinematic) at the end of the first episode, and then the refrain and a shorter shorter version of the cinematic play at the beginning of every other episode for the rest of the season. An epic theme song that fits perfectly with the story.

Disc 1, Track 3: Mirror, Mirror (White Trailer) – Weiss's theme is perhaps my favorite character theme. (I say perhaps because they're all very good.) Casey Williams is Weiss's singing voice, and while she doesn't sound exactly like Weiss, it's still an incredible song.

Disc 1, Track 9: Red Like Roses, Part II – Red Like Roses is Ruby's theme, first heard in the Red Trailer. The Red Trailer begins by showing Ruby visiting her mother's grave, as Casey sings a few poetic lines about each of the four main characters. Red Like Roses Part II is a standalone song that works as a sequel to Red Like Roses. Casey sings from Ruby's point of view, expressing her desperation and loss about the death of her mother. Casey's real-world mother, Sandra Lee Casey, sings from the point of view of Ruby's mother, expressing what she would have said to her daughter if she'd had a chance before she died. This is one of my absolute favorite songs to listen to. The first verse and refrain are heard in Episode 8.

Disc 2, Track 1: Ruby Rose – The score to the first episode of RWBY. It begins with the slow, dramatic music that accompanies the prologue (which is narrated by Jen Taylor), before transitioning into the beautiful and eerie cello and piano duo that introduces the villain Roman Torchwick. After that we hear our first battle music of the series, which sprinkles in a few instrumental bits of Ruby's theme, Red Like Roses. We then move on to an interrogation scene, and we end with being introduced to the theme of Beacon Academy. This track covers many moods and scenes, and there's not a dull moment.

Disc 2, Track 8: Players and Pieces – Episode 8 was arguably the most epic episode of Volume 1. It's filled with epic score and some darn epic battles. Be prepared for Nora's obnoxious (but hilarious) "I'm queen of the castle!" to pop in along the way. Additionally, Episode 8 was the episode that featured Red Like Roses Part II, and this track includes the instrumental build-up of the song that is not featured in the version of the song that's included on Disc 1. The track is concluded by reprising Torchwick's theme from the first epsisode.

Disc 2, Track 16: Black and White – The final episode of Volume 1. Many cool variations of themes, including a battle version of Torchwick's theme. The fact that the three tracks I picked to feature in this just happened to be the three that feature Torchwick's instrumental theme is mere coincidence. It is a really cool theme, though.

Purchase the RWBY, Volume 1 soundtrack on the Rooster Teeth Store or iTunes.
Or listen to it for free on Spotify or YouTube.
Posted by Arkatox at 2:00 PM No comments: