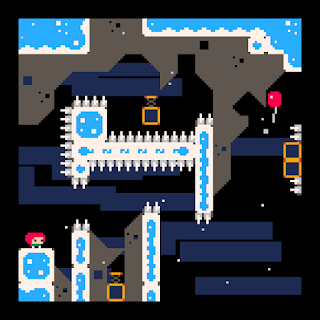 Celeste is a 2D platformer video game by Matt Thorson and Noel Berry. It's about scaling a mountain, and was made in four days.

While Thorson has hit it big in recent years for developing TowerFall and its various versions, he's always been known in the indie gaming community as one of the masters of difficult 2D platformers. Even with TowerFall he created goals and achievements that only a handful of people could ever even think to attain. When Matt Makes a Game, you know to fear it.

You're an unnamed figure scaling a great mountain, level by level. You can move and jump, and also use a dash move that can serve as a double-jump. Partway through the game you find an upgrade that gives you a second dash, and thus a second double-jump. The levels are designed around these mechanics and others, such as wall-jumping and balloons that restore your ability to dash mid-air.

It's reminiscent of the tight, "get from point A to point B" platformers Thorson used to make. The difficulty is there, and the intelligent design is there. Unfortunately, the gameplay is somewhat flawed. Your character doesn't always dash in the direction you're pressing the keys, which can cause a good many deaths as the fault of the game and not the player. Berry coded the game, so I'm laying the fault on him. (Realistically, it was probably the program they used to code the game.)

I entered the game and was immediately reminded how much I suck at video games. I spent an embarrassing amount of time on just the first level because I couldn't entirely figure out how the mechanics worked. I beat the game in a solid half hour, but not before getting an ungodly death count of 333. (Seriously, though, a good number of them really weren't my fault. I swear!)

Celeste is a fun, tight platfromer that will challenge those good at the genre and infuriate those who aren't. I really enjoyed it. If you think it sounds like interesting, give it a shot. It's free on PC.

Playing this game made want to go back and play Matt Thorson's older games, such as MoneySeize and the Jumper series. Or perhaps I'll finally beat An Untitled Story on "Masterful" difficulty and then review it on my blog for the third time.

Play Celeste here.
Posted by Arkatox at 4:00 PM No comments:

Soundtrack of the Month: September 2015 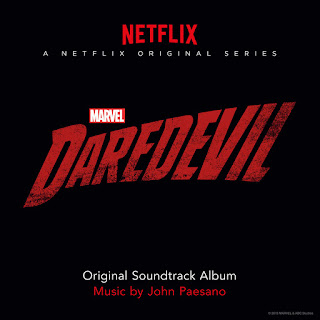 The soundtrack, scored by John Paesano, reflects and retains the brutally dark atmosphere and tone of Daredevil, while also reflecting the quality and passion put into the project to make it the extraordinary story that it is. The power resonated in the main theme alone, and sustained throughout the rest of the soundtrack, sets the bar of quality for the series. A bar that was reached, as no easy feat.

Daredevil is the first television series set in the Marvel Cinematic Universe to receive a soundtrack release. Agents of S.H.I.E.L.D. and Agent Carter both feature remarkable soundtracks, composed by renowned composers Bear McCreary and Christopher Lennertz respectively, but of the three Daredevil stands on top. It truly is a crime, however, that these other soundtracks have not been released.

Track 1: Main Title – The main theme of the series, set to an equally majestic and artistic intro sequence.

Track 12: Avocados at Law – This song and scene remind me of all the great times I've had with my closest friends. It bears a feeling of nostalgia, as we're shown a memorable night from Matt and Foggy's past.

Purchase DAREDEVIL: Music from the Original Series on iTunes or Amazon MP3.
Or listen to it for free on Spotify or YouTube.

Remember, you can keep updated on what television series I'm currently watching on my Status page.
Posted by Arkatox at 4:00 PM No comments: