Now you're probably all surprised that I'm hosting not only one, but two, giveaways on my blog, but I'm sorry to say that these are not my giveaways.

The first one is being hosted by Merrie Destefano. If you remember, I reviewed her novel Afterlife back in January (it seems like it was a longer time ago, but that's what my blog says), and I loved it. At that time Afterlife was her only released novel, but now there is a new book on bookstore shelves, and it's called Feast. I'm very interested in what it's about, considering how much I enjoyed Afterlife. 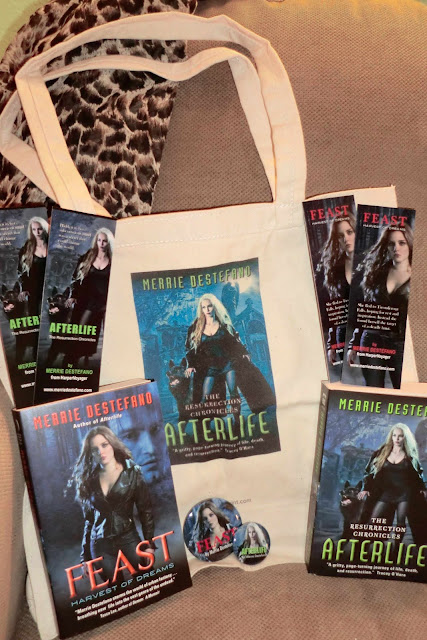 Not only this this giveaway a chance to win signed copies of both Afterlife and Feast, but several other small "thingies" that are pretty cool as well.

Details on this giveaway can be found here.

The second giveaway has a much larger value (approximately $300), and is just plain huge. Why would I mention a 20-book giveaway right after a 2-book giveaway? Maybe to make the 2-book giveaway not seem as great? Hah! Don't act like I'm trying to insult Merrie Destefano's books! I love them!

This giveaway is hosted by bestselling author Robert Liparulo, and is, as I said, huge.

This giveaway is fairly confusing, but the prize is . . . just plain awesome. The confusing details can be found here. If you do enter, please enter my name (that would be Reuben Horst, thank you) in the area for "Friend 1" so we can both be entered another chance to win.

I like giveaways, because occasionally I win one (in the past I've won a total of three novels, two music CDs, and one VeggieTales movie). You should enter these giveaways here, because you may win too. :)