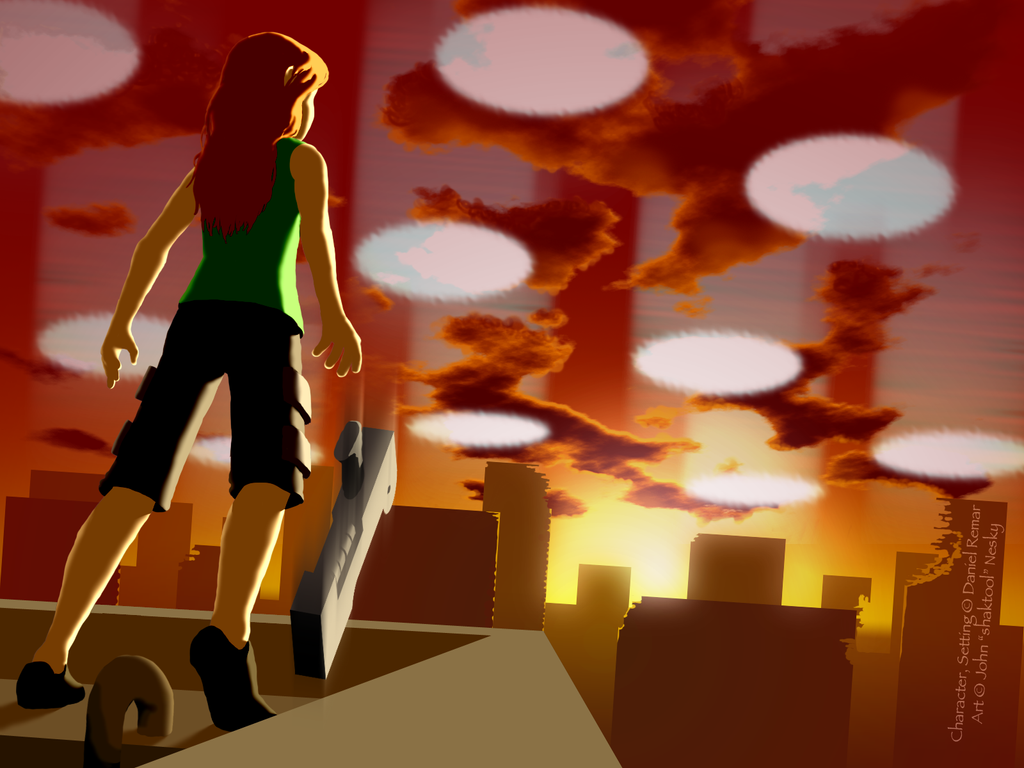 I have been a fan of Dan Remar since I first played his 2D platformer puzzle game, Castle of Elite, two or three years ago. I have stuck with him (been a loyal fan) since the release of his two latest games, Iji and Hero Core. He is currently working on a new game, Hyper Princess Pitch, partially based on the old DOS game Operation: Carnage.

I recently sat down with this man (figuratively) to talk about the games he made. The results are below in white.

Reuben Horst: So how’s your life been recently, Daniel?
Daniel Remar: Pretty calm, but stressful - I need to stop feeling guilty for not answering emails on time or not updating my site or not working on my games for a while. I think having a cell phone, email adress and near-constant internet access leaves me too little time to relax and get away from other people's expectations, and the ones I place on myself. I stay away from social sites or things like Twitter, or I'd probably break. :p

RH: I know you like a lot of NES/SNES/DOS titles. Care to list some of your favorites?

DR: That's a lot... I can't really make a list. But the ones most influencing my work the last few years are games like Metroid, Jetpack, Section Z and Equinox.

RH: Which of the games you have made are you the most satisfied with?

DR: I'd say Hero Core, and Iji but for different reasons - the former because the design and execution is better than my previous games, the latter because I actually managed to finish it, especially since I'd stopped doing my comic "Ultimortal" halfway in 2004 and realized how terrible it was in hindsight. Iji is also the game that taught me how to handle critiscism; the improvements from 1.0 to 1.3 were mainly things people found were poorly done or missing. But it shows that I started working on it in 2004, and most of the writing and cutscene pictures are beyond saving from terribleness.

RH: What really inspires you to make games?

DR: My imagination mainly, and wanting to make people happy while making them think and feel. I need creative outlets all the time and have been drawing and making games since Qbasic, but as I grew older my games started to get "serious" twists to them, to keep them from being one-dimensional. There are few things more juvenile to me than a modern game with an angry man with a gun out for revenge. But I still make everything from Retrobattle to Iji and the extremes of World Fell Silent - I'm not saying I didn't enjoy games like Death Rally, but they had a sense of self-awareness to them.

After the potentially depressing endings of Iji and Hero Core though, I'm back to making more positively-toned games, whether they have any action or not. I'm drawn to the Super Mario games' way of inspiring your imagination and joy regardless of age.

RH: Acknowledging the fact that you have stated that there will most likely not ever be a sequel to your game Iji, do you think there is any possibility of there being more media related to the game in the future?

DR: I'm not sure. I like the little quirks of the setting, but with a game with so much text and backstory, not to mention plot holes, it's hard not to get self-indulgent and just spout more text about it. It would have to be a game or something interactive that makes use of the setting. Actually on the whiteboard at work there was such a game designed, called Tasen Lift Repairman, but I won't say any more or I'd just feel stressed about having to make that too. :p

RH: You are currently working on a game called Hyper Princess Pitch that was inspired by a DOS game called Operation: Carnage. Could you tell us a bit about this project?

DR: It's a lot of fun to make. If you've played Operation: Carnage, you'll recognize nearly everything about Hyper Princess Pitch's gameplay. However I want to improve on the things I didn't personally like about Operation: Carnage, such as the unfairness of dying and having to restart a whole room which is likely to get you killed several times more, and long waiting times between spawn waves.

To me, Operation: Carnage was all about the old-school cheesiness, the apparently crazy self-narrating player character and the over-the-top explosions and powerups. I try to make these more pronounced in Hyper Princess Pitch without sacrificing the gameplay or imbalancing it too much. However it has a 90's demoscene look in places, and the same kind of humor as Garden Gnome Carnage, so people will likely find it weird, especially if they haven't played GGC and know the characters. I'm afraid some will think it's just going for the "random humor" route, with mecha-elves, cats, princesses, piledrivers and rainbows, but it's really just building on the GGC world, which was made before I knew these things were pretty much mainstream tropes.

To counter this I'm putting more effort into the presentation and gameplay than before, so it's consistently better animated and snappier than my previous games, and I try to make it fun and varied to play through many times. The final boss uses a better variation of joint animation than Iji's final boss, for instance, and the different hats that represent the difficulty levels are worn by Pitch in the cutscene pictures and in-game sprites. However the higher expectations I put on myself also means it's been delayed for months, compared to when I thought it would be released. Right now I've been stuck on the ending animations for weeks due to a lack of motivation and friends asking "is it done yet?".

To return to a previous question, while you're playing a villain and it's an arcade action game, there's a playful mood and Pitch herself is cheerfully aggressive. I think just making her angry or giving the game a serious tone wouldn't make you feel happy and encouraged to replay it, and it would lose the self-awareness. After all, this is a game with garish colors and obvious nods to Mischief Makers, so any moment of seriousness is either accidental or played for laughs.

RH: Have you picked an artist to create the soundtrack for Hyper Princess Pitch yet?

DR: Yes, it's a great artist I've "hired" before, but no music has been produced yet so I don't know if I should say anything about this yet.

RH: You mentioned on your site recently that after your current project you’re going to take a long break from computers and gaming, so it will be the last game for quite a while. How long would you estimate before you ever develop another game?

DR: I won't stop planning and developing, but the game planned after Pitch is potentially a big one, and I won't work as quickly on it either. I need to excercise more and experience more new things, is all. While I'm very happy with my job at Ludosity it's becoming stale to have the same routine every day, and my back is suffering from all the sitting in front of screens. I had serious back pain for a while during Iji's development when I literally just sat and coded for weeks on end, and when your body tells you to stop, you listen.

But after Hyper Princess Pitch I'll also be pretty content with the collection of games I've done, so I may just want to do something different with my spare time for a while. I've wanted to join a voulenteer organization to do something more useful than making games, but I've always been too lazy, which is yet another factor of guilt and stress. :p

RH: What are some of your favorite freeware PC games?

RH: What is your favorite brand of soda?

RH: Thanks for your time, man!

DR: You're welcome!
---------
And there you have it, people. One interview, ten questions, pure awesome. Keep checking my blog in the next couple days for interviews with indie developers Chris Roper and Matt Thorson!
Daniel Remar's Website
Until later,
Reuben Horst
Posted by Arkatox at 11:33 AM